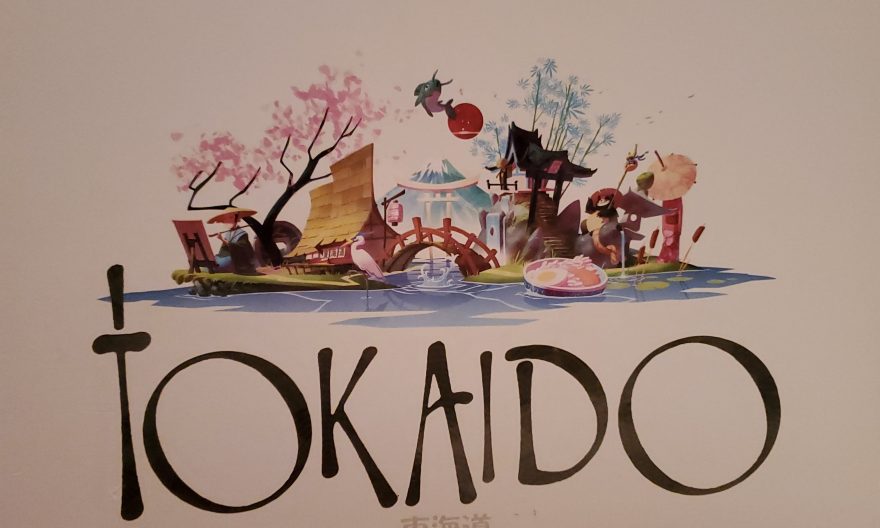 Tokaido is a board game for 2-5 players. The recommended age is 8+ years. Approximate length of play time is 45 minutes. This is a stunningly beautiful board game with original artwork by Naiade.

The path leads the traveler (the player) along the legendary East Sea Road from Kyoto to Edo. There are 10 different traveler personas, each with special abilities which come into play during the game.

Along the way, travelers have opportunities to stop over in villages, temples, farms, hot springs, and view panoramic vistas. They will have encounters with other non-player characters and taste traditional foods at roadside inns. Points are collected at each of these stops and from each encounter. The object of the game is to collect the most points by the time one reaches the end of the road at Edo.

At the beginning of the game, players choose (blindly) two character cards. Each card is a different persona and the player must choose which one they would like to be for the game and return the second card to the box.

All players begin the game with a certain number of coins (determined by which character they chose) and at the first of five inns situated along the road. The player in the last position goes first and chooses an open space on the path between the first and second inn. Depending on which space they chose, they will acquire coins, accrue points, make a donation to the temple, choose a panoramic vista card, or purchase souvenirs. In some cases, a player in last position will remain in last position after their move and will, therefore, immediately take another turn. Play is continued in this way until all players have reached the first inn. The first players to reach each inn must wait until all players have arrived before the next leg of the journey can commence. During the stop at the inn, players have an opportunity to dine on traditional dishes. Each of the actions performed along the road and at the inn garner points, which are kept track of in real time, with markers along the side of the board, as players earn them.

Once all the travelers have reached the last of the five inns, at Edo, the game concludes. Special points are awarded to players for each of the following accomplishments:

Any special points are added to the running totals which players gained during game play and the player with the most points wins the game!