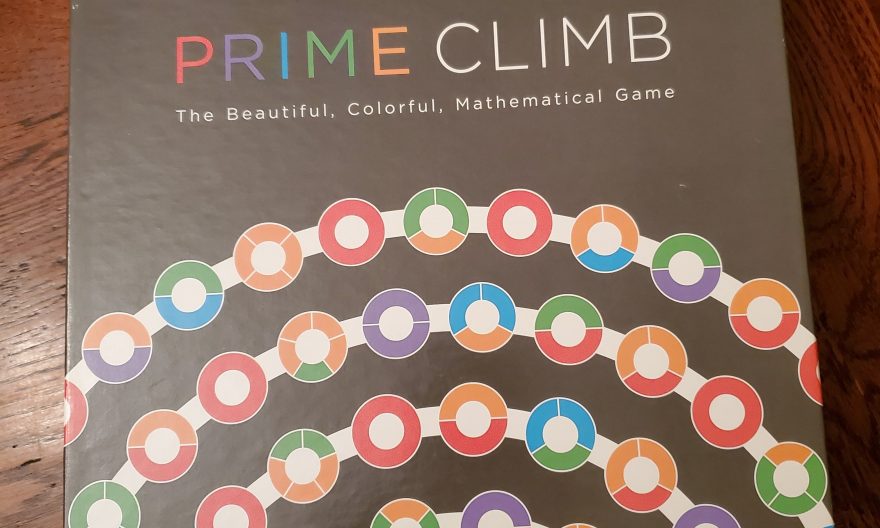 Prime Climb is a fast-paced game which combines strategy and chance, while awakening a love of math! Prime climb is simple enough for kids to participate and dynamic enough for adults to enjoy. The game is for 2-4 players. Recommended ages is 10+ (we feel younger players can handle it). Time of play is 20-60 minutes. There are variations of play given in the back of the rule book that offer ways to make the game easier or more challenging, depending on interest, ability, and time available.

The beautifully designed board creates a spiral ladder of numbers from 0-101. The color patterns also serve a useful purpose, as explained below in the “How to Play” section.

Players use addition, subtraction, multiplication, and division to move their pawns along the spiral board to the center circle, the prime number 101. The first player to land both their pawns on 101 (exactly, without going over) is the winner!

One of the great innovations of Prime Climb is the coloring scheme. Each of the prime numbers less than 10 has its own color: 2 is orange, 3 is green, 5 is blue, and 7 is purple. After 10, each prime number is red. Any number that is not a prime is a mix of colors that corresponds to its prime factorization. For example, 14 = 2 x 7, so the 14 circle is half orange and half purple.

The color coding allows players a way to quickly analyze the factors and multiples of the numbers on the board. This helps players check their multiplication and division, and even allows kids who haven’t yet learned multiplication to play the game.