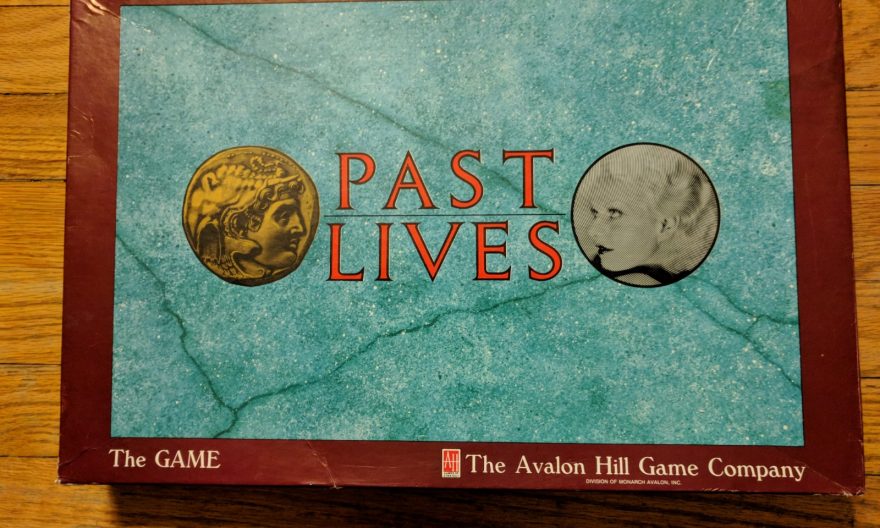 Past Lives is a great game made by the Avalon Hill Game Co. It is a very old game and is for 2-8 players. Throughout the game you will go through ancient times such as The Industrial Age, The Dark Age, The Age of Kings, and finally The Ancient Age. You might die, sacrifice all your possessions, and maybe even own the Statue of Liberty, or the Mona Lisa! Travel through time with your friends and family and discover your PAST LIFE!

To set up Past Lives, lay out the board like this: Once you do that, pop out the cards for twists of fate and treasures. After that, sort them into piles and lay them out by the board. When you are finished, the board will look like this:

Set the cards that say “Major Treasure” off to the side in a pile. also put the Karma cards ( The ones that have big numbers on the front) in a pile and give each player a card that says “1” we will talk about leveling up Karma later on in this post.

To start of have each of the players choose who they would like to be; Albert Einstein, Jean Harlow, Napoleon, Elizabeth I, Merlin, Lady Godiva, King David, and Queen Nefertiti. To start everyone gets 1000 credits; 7 gold (100 credits each), 4 silver (50 credits each), and 4 copper (25 credits)

There are many spaces that are involved in Past lives, including Treasure, Nuclear Spill, 100 Years War, and many more.

To start of I think we should go to the most exciting space, Treasure. If you  land on a treasure space, take out a treasure card correspondent to your era. If you can and want to by it, then you may. But, if you don’t want it or you don’t have enough money for it, then you can’t.

If you land on a Major Treasure space, then you may take the major treasure and pay for it if you have enough money. However, if someone owns the Major Treasure already, then put it back and try again another time in a different era.

The next spaces are the hazard spaces, they are Nuclear Spill for the Industrial Age, The 100 Year War for the Dark Ages, a Plague for the Age of Kings, and a Famine for the Ancient Age. If you land on one of these spaces, you lose a turn.

The next space is the Twist of Fate. On which you take a twist of fate card and do the action on it. This is one of the spaces which is most common, along with treasure.

Next is Vengeance, the space of stealing, on this space the player chooses a player and they have to give them 200 in credits.

Next, go out to the casino and gamble on the gambling space. The player who landed on the space chooses either 2 through 6 or 8 through 12 (7 is a stand-off). A loss will go to charity and a win will get you your bids.

The Lucky Day space is only at the beginning of three ages, the Dark Ages, the Age of Kings, and the Ancient Ages (not the industrial age). This space allows you to go back the amount of spaces on the die. And, if you go into an old era, then you can collect 200 coins again when re-entering the era (you get 200 credits when you enter a new era).

The Barter space is when every player passes a treasure to the player on their right.

Time Portal is when you choose an age to go to and go to it’s first space. You do collect 200 coins.

When you land on Sudden Death, you immediately lose everything. Unless someone is willing to give you 1000 credits you are out of the game.

If you are playing  Past Lives and another player lands on Sudden Death, you can donate 1000 credits to the player and the will come back in the game and you will receive a new Karma level (this will play an important role in your past life and you do want to level it up)

The Evil Eye space is a space where you also sacrifice everything (and your life is included) against another player. The player that landed on the space rolls the die. Then,  the player they challenged says whether they are going to roll higher or lower. If they are right then they take all player 1’s possessions and then player 1 is out of the game (and vice versa)

If you land on charity then you get everything in it.

Karma Levels help to determine your past life and they are important. They are The Scum of the Earth, The Commonplace and the Vulgar, Heroes and Heroines, and The Great and the Saintly. To level up Karma you can give money to someone who has died from a sudden death.

To get to Nirvana you need to travel all the  way around the board. Once everyone is to Nirvana, go to the rule book and at the back are past lives. Start with the first person to reach Nirvana and see what level of Karma they are on. Go to that section in the book. Then see how much money the money the had. Once you have counted out the money, go to what the amount falls into. Read the caption and then see who their past life was.

I hope you liked this post and you enjoy Past Lives with your family. This game is very old and is very hard to find. I found it in my parents basement. The first time we played it, my sister dropped out earlier.