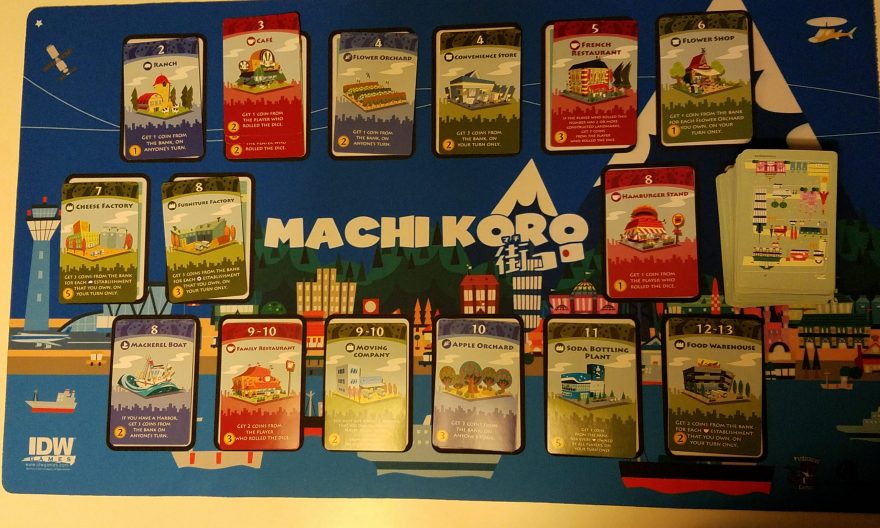 Machi Koro is a building game were you and your friends set out to complete your town in China. You can play with 2-4 players but you can play with more friends with the expansion packs.Now, to begin.

To set up, give every player a wheat field and a bakery without numbers on the bottom.

Next, give everyone their Train Station, Shopping Mall, Amusement Park, and Radio Tower. Once everyone has gotten those, flip them over to the construction side of the card. Now, lay out the cards, take the deck of cards and pull out 15 of them and put them face up. If there are 2 or more of the same card, then stack them on top of one another. For example, in this image the cafe is stacked on top of one another because they are the same. Also in my image I have the Machi Koro card mat which is purchasable with the game.When you lay out the cards, put them in number order. Once you have done that, you can begin.

To start playing, give everyone 3 number one coins. The first person can then roll only one dice (If you unlock the train station, you can roll two.) If they roll a one, two, or three, a card gets activated. If they rolled a one, everyone receives a one coin. Because the wheat field has a one on top of it which means that if someone rolls a one, then that card gets activated. At the bottom, it says that everyone receives a one coin if anyone rolls a one. If they rolled a 2-3, then they receive a  coin to themselves because the bakery card says that when someone rolls a 2-3 only they receive a coin.

After a few turns around the table, you can start buying shops, factories and other things on the market. To buy these, you can use your coins.

To finish the game, someone must have all the main buildings Train Station, Shopping Mall, Amusement Park, and the Radio Tower. In the Harbor Expansion pack, you will also need to unlock the Harbor and Airport to complete a game.

I hope you have a great time playing Machi Koro!