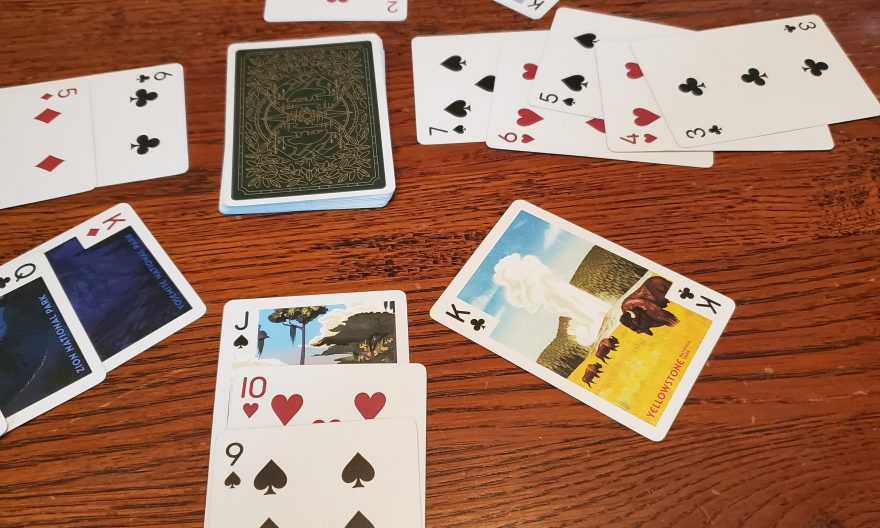 Kings in the Corner is a fun game that makes you rely on your cards more than your luck. You always need to be one step ahead and keep an eye out for opportunity. My mom has been playing this game since she was a kid so trust me – anything that has been around for that long has to have been pretty appealing. Well, I hope you enjoy it.

To start, shuffle the deck up well. Once you have done that, deal seven cards to each player. Once everyone has seven cards, place the rest of the deck in the center of the table and flip one card to each side of the pile. Now, you’re ready to begin.

Now that you’ve set everything up, you’re ready to play. The first player (the player to the left of the dealer) begins and play continues clockwise.

At the beginning of any turn, regardless of anything else, a player must pick up a card.

For the second phase of a turn, a player has to place down any cards that correspond to any of the cards on the table in a Solitaire fashion. (e.g. if there were a ten of clubs on the table, you would need either a nine of diamonds or hearts to go underneath)

In a similar way to the second phase, the third phase is about freeing up space. If a king was one of the four starter cards, then immediately (hence the name) you would move him to one of the four corners. If you had one pile that ended in a Jack of diamonds, and another pile that began with the ten of clubs, you could move the second pile to the aforementioned one.

This step is completely dependent on whether or not you freed up a space in the last step. If you did, and it resulted in an open space, feel free to put down any cards you like.

By knocking you are saying that your turn is officially over, and you are handing over anything you missed for the next player to find. And you can make no further moves whatsoever.

The winner is the first person to place all their cards. Sometimes this can happen very quickly, sometimes even on the first or second rounds of play, but it is what it is. I have played in a game that lasted close to an hour! Sometimes when I play, someone goes out on their first turn. All in all, Kings in the Corner is a fun and engaging game and the only thing you need to play is a deck of cards.